Laser light treatment is the transfer of energy to the cells. Laser light’s energy penetrates the skin and initiates cell functions. This strengthens the immune system and icrease blood flow.

The Effects of Laser Light

Energy is measured in Joule

The effect of the laser determines how fast the energy is transferred to the tissue being treated!

Generally, the more powerful the laser, the more joules are transferred to the tissue thus giving faster treatment results. 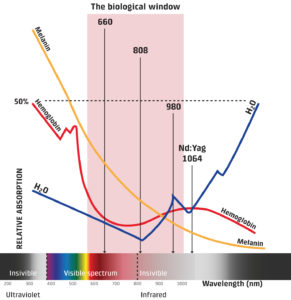 Lasers with a very high effect however have a greater risk of overdosing the tissue. Laser therapy, as mentioned, is the transfer of energy to the cells and the amount of energy required for stimulation of the cells is directly proportionate to the number of cells stimulated (area x depth).

Thus, it is not enough to reduce treatment time on small and/or superficial structures – in this case, the density of effect (Watt/cm2) will be too great. Too great intensity will result in the inhibitions of the cells. If the cells are inhibited, biostimulation will not occur and thus the treatment is ineffective.

The biological response in relation to the amount of energy transmitted to the tissue is described in the “Arndt-Schulz Law”.