Laser Light for Therapeutic Use

Laser Light can Transfer Energy to the Cells Without the Risk of Heating the Tissue.

The word “LASER” is an acronym for “Light Amplification by Stimulated Emission of Radiation.”

The wavelength of the laser is measured in nm (nanometer) and the laser light energy is measured in mW (milliwat) and in Joule (1000 mW = 1 W = 1 J per sec.). A laser is a light gun that emits trillions of photons (energy packs) in a specific color (wavelength) which is amplified many times and sent out through an optical lens that gathers the light. This allows for a large amount of energy to be deposited in a small area. Light can be described as photons moving in waves. The difference between two wave peaks is called the wavelength (nm) and determines whether the human eye can perceive it and also what color the light is perceived as. The visible part of the light spectrum ranges from 380 to 670 nm.

Laser light intended for treatment with a wavelength of 808 or 980 nm is invisible to the human eye while laser light emitted with e.g. 660 nm is visible as red light.
The crucial difference between laser light and ordinary light is that all the laser light photons move in waves that are in phase. This means that the laser energy is not emitted as heat, but first released when the laser light hits a surface where energy can be absorbed. Normal light releases most of its energy as heat, because the energy can not be transmitted directly.

Laser class 3B for treatments are, as a starting point, harmless and safe to use.

A laser with an energy rating of more than 500 mW is categorized as a laser class 4, which means, that there are claims regarding equipment safety and operation, as well as the need for eye and unprotected skin protection.

Laser class 4 lasers may cause large areas of burns on skin and in tissue when used incorrectly.

E.g. a laser with an energy rating on 5000 mW would have to be spread over an area of approx 10 cm2 to avoid heating and burns of skin and tissue. If a high amount of laser energy is required for the treatment, this can be obtained by using multiple lasers, affecting their own respective areas.

The laser can also be built with multiple lasers, each of which must be max. 500 mW, affecting its own area. Thus a laser can be designed to handle a large area at once.

Laser light with wavelength from approx. 600 nm (visible light) to 1000 nm (invisible infrared) is referred to as the “biological window” allowing the light to penetrate and thereby spread into the tissue and affect the cells. The depth effect of a 600 to 700 nm wavelength is approx.  1-2 cm, and is mostly used for skin and wound treatment. While at 800-900 nm a depth effect of approx. 3-4 cm is obtained, which is primarily used for pain and tissue treatment.
Laser light with a wavelength of less than 600 nm or above 1000 nm is stopped by the skins pigment, hair follicles, blood and the water molecules in the body. Therefore it can not be used for treatment. 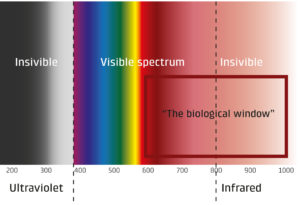 Laser light is the transfer of energy to the cells. The energy of the laser light penetrates skin and initiate cell functions. This strengthens the immune system and increases blood flow.

The fact that laser light affects the body’s immune system and the ability to accelerate the healing proces during disease and injury, causes the laser’s treatment applications area to be numerous.

LLLT/PBM is approved as a recognized medical treatment, and medical equipment marked a CE is approved by the EU.
More than 6000 published, scientific studies and clinical trials worldwide have been presented, supporting the significant effect of the treatment
with LLLT/PBM on a variety of issues and treatments.